Can Breast Augmentation Prevent Me From Breastfeeding?

Many cosmetic surgeries are designed and directed toward patients who are trying to combat the signs of aging and gravity; these are typically procedures that a patient wouldn’t consider until later in life (or at least until after they’ve had children). Breast augmentation, however, is not one of these procedures. Many women, even women as young as their late teens, desire breast augmentation. The reason for this is understandable: women want to start enjoying their results, their enhanced physique and their boosted confidence, as soon as possible, even if that means undergoing surgery before having kids. While some young women may not think about how their augmentation can affect them down the road when it comes to pregnancy, childbirth, and, of course, breastfeeding, other women place the latter as an essential part of their decision to undergo breast augmentation surgery. 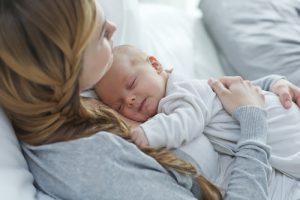 By all accounts, breast augmentation will not play a significant factor in your ability to breastfeed down the road. This is because breast augmentation typically does not affect the milk ducts. Keeping the milk ducts intact and protected through the surgery will help to increase the chances of breastfeeding your child. While many women with implants can still breastfeed, there are some details to keep in mind.

Breast implants can be inserted through one of three incision locations: in the crease below the breast, around the areola, or in the armpit. This location will play a significant role in your ability to breastfeed. If breastfeeding is a concern, then you should choose an incision made either in the crease below the breast or in the armpit. These two options will have less of an effect on the milk ducts. An incision made around the areola can affect the milk supply by upsetting nipple sensation or by cutting the nerve that triggers milk production. With the areola incision option, you may still be able to produce some milk, but you may not be able to produce enough without having to supplement it with formula.

Implants can be placed either above or below the chest muscle. While there isn’t much hard evidence on this fact, it is thought that placing implants under the muscle is beneficial to breastfeeding as it puts less pressure on the glands, which means it interferes less with milk production.

While keeping this information in mind will help to increase your chances to breastfeed after your breast augmentation, it is important to remember that not all women can produce milk. If, however, you choose to undergo breast augmentation surgery and breastfeeding is a top priority for you, be sure to let your doctor know this up front so that he can tailor your procedure to your desires.

If you are interested in learning more about breast augmentation surgery, contact Dr. Grazer today by calling (949) 644-1240 to schedule a consultation.